To Kill a Mockingbird is still my favorite novel of all time.  I still think of it as a miracle of art and invention and humanity.  I still remember the life raft it gave me as I read it and how it still kept me afloat from time to time even years later.  I still thank Harper Lee for that.  I always will. 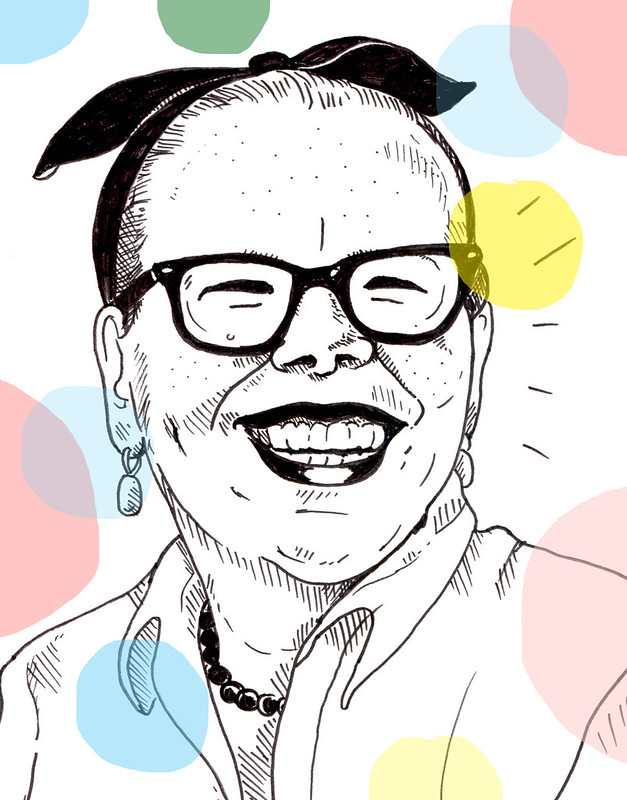 “We know that athletes, musicians, and actors all have to practice, rehearse, repeat things until it gets in the body, the ‘muscle memory’ but for some reason writers and visual artists think they have to be inspired before they make something, not suspecting the physical act of writing or drawing is what brings that inspiration about. Worrying about its worth and value to others before it exists can keep us immobilized forever. Any story we write or picture we make cannot demonstrate its worth until we write or draw it. The answer cannot come to us any other way.” 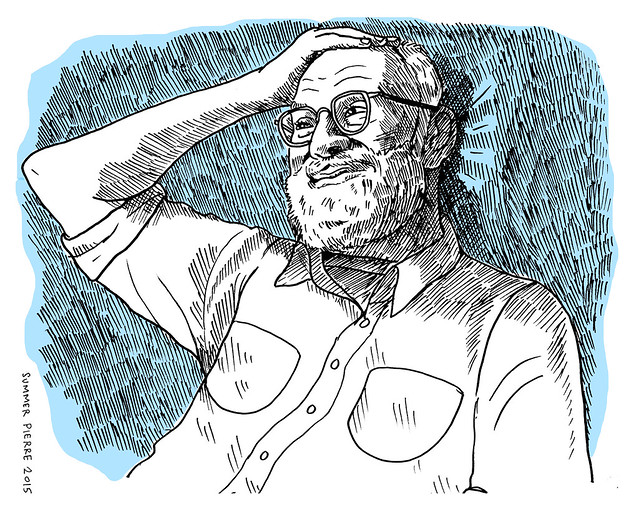 Hi all, I am back–almost.  My computer has been in and out of the shop–and will go back again, but I wanted to touch base quickly to say that I had a great and instructive time this summer and I am happy to touch base again.  Also, this:

As almost everyone knows, we lost the great writer and neurologist Oliver Sacks on Sunday.  His books were enormously important to me.  He had been on my family’s bookshelves for years, and had been spoken of with such reverence from my folks, that I felt I knew him before I had read anything. Then while recovering from surgery on the couch at my folks’ place, I picked up An Anthropologist on Mars and immediately fell in love with essays.  It was clear from the first reading that he was a man in who was deeply curious and delighted by all he encountered in the world.  I never came away from his books without feeling that the world was totally broken open to me in a new way.

I will probably re-read one of his most recent meditations on dying several times throughout the rest of my life to remember how powerful the human experience is–even at the end, which Sacks described so vividly and with love.  Like every one else, I followed any and all inklings to his failing health after his announcement in February of his terminal condition.  My husband Graham was the one who broke the news to me and was not surprised when I cried openly upon hearing it.  I said, “I don’t think there is anyone I’d rather hear more from on what dying is like.”  Graham, without missing a beat, said: “I think he would love to tell us about it if he could.”

I think of him in these lines of the Mary Oliver poem “When Death Comes”:

When it’s over, I want to say: all my life

I was a bride married to amazement.

I was the bridegroom, taking the world into my arms.

May we all be so fortunate to be so alive and awake to the surrounding world while we are here as he seemed to be. 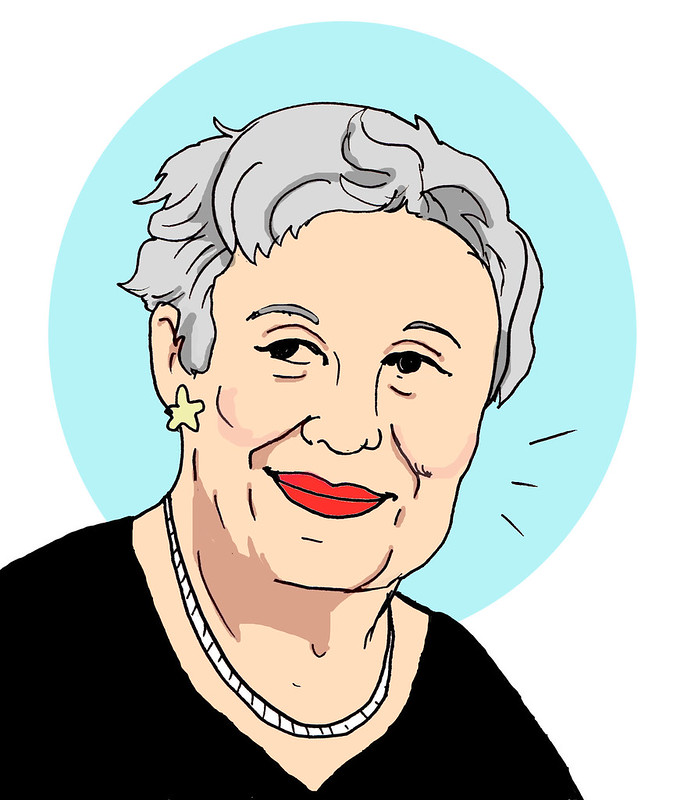 Anybody see this article in The New York Times about the writer Edith Pearlman? I had heard of her before only because a friend of mine is related to her, but as you will read in the article, Pearlman has been a working short story writer for 50 years and is just now at the age of 78 being “discovered.”

As Americans we love the success story–the wunderkinds, the late bloomers, the underdogs, and the self-made especially.  Nowadays stories of success and lessons in success(especially in the arts) seem to have taken on a sort of fanatical interest.  We welcome and eat up failure stories–but only by the successful (those valued by a large audience or an important one).  I can’t help but think continually that even these stories feed our cultural mythology around the arts–that all of us toiling away at our work will someday matter when we reach that golden pot of fame and notoriety.

I love Pearlman’s example, not because she is at last getting the acclaim she deserves.  I love it because hers is a powerful example of a real and successful life in the arts–a life of dedicated work and perseverance.  She was serious and good and didn’t quit when it was only noticed by a small number.  A lot of people would have quit after the first ten years–heck, the first five!

I think about any number of literary magazines that I pick up a few times a year and I have never heard of any of the people published within them.  Yet aren’t those people serious and some even truly good?  They were serious enough to work on their stories, essays, and poems and they were serious enough to research literary magazines, and submit to those magazines.  Pearlman did this for 50 years without much notoriety.  The truth is she is still incredibly fortunate to be be getting the rewards and the attention that she deserves.  There are hundreds (maybe thousands?!) of people doing valuable work, who may never be valued by a large or important audience.  We may never know their stories.  Perhaps I am one of them–and will I be a failure? Will you? Is it a waste to work and care and try if it doesn’t go the places we think it should?

Probably the biggest influence to my writing and comics is poetry.  I am a giant reader of poetry and find the kind of poems I love have a lot in common with comics I love.  I used to write poetry, but lost the knack for it when I began to write songs.  Now I feel like comics have sort of returned a version of poetry to me.  I consider my one page stories my version of poems.  As it happens, poetry comics are a medium in itself.  I first discovered this about a year and a half ago through an article about the comic poet Bianca Stone.  Through the article I discovered the works of Alexander Rothman and Paul K. Tunis.  Until they met each other they all thought they had invented poetry comics–and here I was thinking I was the only one!

I am excited that they got their brains together, along with Gary Sullivan, and started the first ever comic poetry journal INK BRICK.  The inaugural issue came out in May and it made me so happy to see it arrive in my post office box. It is a beautiful print journal–in full color. I wish they had attached some sort of introduction or manifesto to its first issue, because its very existence feels important somehow, yet I can imagine why they didn’t–a four color print journal (of visual poetry!) is a pricy endeavor.  The work itself is making the introduction–and it is clearly an effort of love.

END_OF_DOCUMENT_TOKEN_TO_BE_REPLACED

I am THRILLED to announce that my friend and fellow writing group member, Jeff Soloway’s first book THE TRAVEL WRITER is being released today.  It’s the first in a trilogy of mysteries that is perfect for the summer read on a plane or by the pool.  It’s got all the goods: travel, action, witty dialogue–a mystery for thinkers! Think Graham Greene meets Aaron Sorkin.   I may have to break down and get an e-reader (something I have been loathe to do) just so I can buy this book (it would be worth it!).

(On a personal note, I love my friend Jeff and am very proud of him.)

GO get it now! 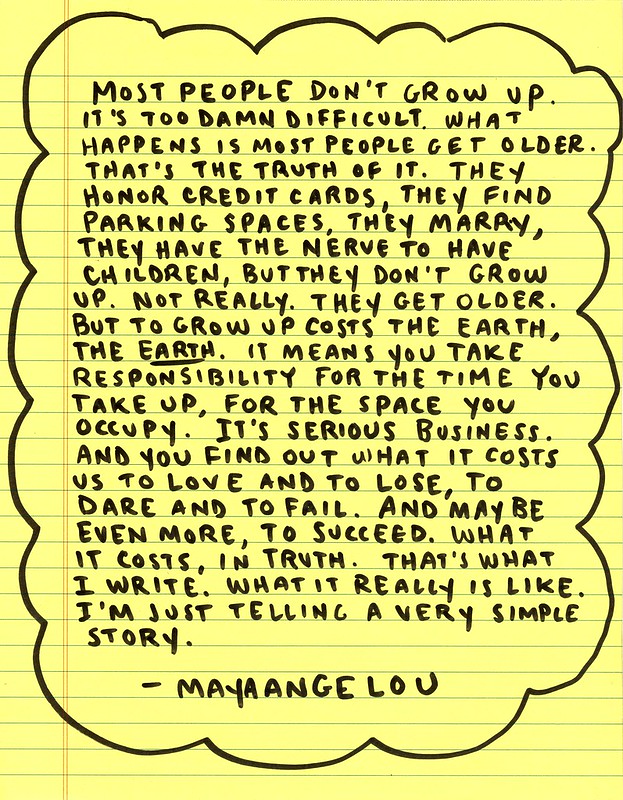 My favorite Maya Angelou anecdote is about when she was young and an aspiring singer actress. Billie Holiday watched one of her performances and later offered this impression: “You will become famous, but it won’t be for your singing.” Perhaps, we have Billie Holiday to thank for the words that came soon after.

In any case, this is the kind of life Maya Angelou lived–legendary. She was a lot of things and small wasn’t one of them. 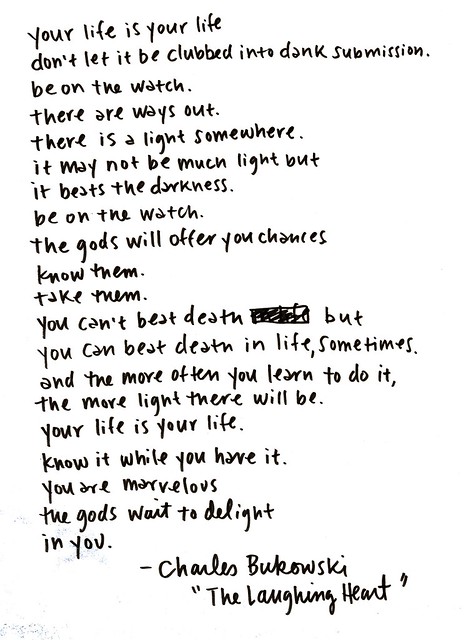 This is hanging above my desk right now.  Bukowski is one of my secret favorite poets.  I’m not alone–you can see Tom Waits reading this poem here.  Happy National Poetry Month–one of the greatest inventions in this country since the hour long lunch break.

Dear artistic people of both practice and heart – especially those on their lunch hour, sitting at their desks, eating their Chipotle burrito and feeling cooped up on another frigid winter day- please watch this video. It is the best 20 minutes I have spent on the internet in a very very long time. I watched and listened to it while I was cleaning my desk for the next chapter of work and ideas and it built some wings on my back, I hope to test out this week. I hope it does the same for you.

I found this via Lynda Barry’s tumblr and I dedicate it to the librarians at my local library.

*Signed Copies* of my BOOK!

More Available in the shop!

The Artist in the Office: How to Creatively Survive and Thrive Seven Days a Week (Paperback)

Everything on this blog is copyright of Summer Pierre, unless otherwise noted! Please do not steal my stuff! I know I should think of it as an honor, but I don't!
Paper Pencil Life
Blog at WordPress.com.
Loading Comments...