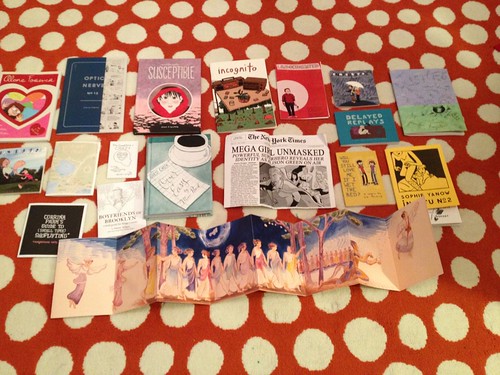 Phew! What a weekend! I may be recovering from this weekend for the next week–and I didn’t even have a BOOTH at MoCCA Fest. It was my first time going and participating in any of it and I was like a kid in a candy store. I was going to draw a comic about both the Drink & Draw Like a Lady night/event and my time at MoCCA, but I don’t have the time as I have some illustration work and some comic work to complete in time for Gus’ spring break that starts on Friday afternoon. So a typed report will have to suffice.

Friday night was a big challenge–I met Gus at his bus, threw our packed bags in the car and hightailed it to the train station. A word of advice: do not arrive at Grand Central at 5:45 on friday night. It’s just a bad idea. Especially carrying two bags and a 4 year old. Oy. Being in the subway with a train loving kid yanking at your arm, while we are literally cheek to jowl with traveling New York is just a perfect storm of anxiety and frustration. Because there was literally no safe room for Gus to stand, I ended up holding Gus along with the two bags on the subway and standing above two seated women who wouldn’t look me in the eye.  My arms are STILL sore.

Gus did not go to bed as planned. Are you kidding? We were in NEW YORK CITY for the night! I was just about to give up on going to Drink & Draw, when Jeff graciously offered to stay up and play with him as long as needed. Oh man, what a friend. This is a guy who’s own wife and kids were out of town and so had big plans to bachelor it up with writing and other adult friends only to have…a four year old to hang out with on a friday night. He really went beyond the call of duty (thank you Jeff!) and I ran out into the rainy night to the great unknown of women and comics.

I made it and the elevator doors opened upon an overheated,shouting, crowded scene of women in a strangely narrow space. I was immediately overwhelmed and had no idea where to go or what to do next. Luckily, I was in a room of arty women normally alone like myself, and so was immediately approached and empathized with over the overwhelm and heat. What a great population swarmed that space that night. The crowd looked exactly how a room full of women in comics would look–every generation, hair color, eyewear, race, size, creed was represented that night. Even though it was hard to maneuver and talk, I was so happy to be among them.  Having been so FRIED on New York arty events, where everyone is either to cool to talk to you, or looking for somebody BETTER to talk to while they are chatting with you, this was an amazing FRIENDLY evening.  Everyone was so buzzed about the impending MoCCA weekend. I really had a sense of it being a BIG event in the comics community. After I got a drink, I went back to the middle of the room by the elevator and hung out a bit, and who should walk out but THE woman I had hoped to meet that night–Glynnis Fawkes, who is another Mutha Magazine contributor. Her work is beautiful and it felt so good to make contact with someone who’s work I know, and who I have a publication in common with. She introduced me to Jennifer Hayden, who I had not heard of, but who’s work I soon discovered is awesome. Then my phone buzzed and Jeff gently suggested I come back and assure Gus that all was okay. So I had to hightail it back a bit early, where I greeted a tired, but overly excited Gus 3 hours past his bedtime.  He got up at his usual 5:30 the next morning and we spent the rest of the day in and out of sleep deprived delirium until Graham got home that night.

Yesterday I got back on the train and was among the first people to come into MoCCA Fest.  It turned out to be a perfect time to go–early, before the crowds (my favorite way to experience anything in NYC).  I was on a mission of discovery and decided to start with the big ticket booths of Top Shelf, Drawn & Quarterly, & Fantagraphics before moving on to smaller, more experimental comics.  I talked to everybody I could, asking what they recommended, what was new and was thrilled to stumble upon books by Mimi Pond, Genevieve Castre, Liz Prince (and the lady herself–which made me blush), and Adrian Tomine.  Then I tried to find some of the women I had met at the Drink & Draw.  I only found Glynnis and Jennifer, who’s work I both purchased (and love).  Now I wish I had not bought a few of the larger items, so I could have bought more from them.  Rookie mistake!  Guess I’ll save my pennies for SPX in September when I see them again!

This is all boring facts, I know–but what a great time it all was.  I feel like I’ve stumbled upon a community and a medium that is so vibrant and exciting–something that I dreamed of while I lived in New York and never experienced.  Of course, part of this just has to do with me and where I am in my life.  I am not only producing work that feels real and connected to something bigger than myself, but I want and am ready to be with others who feel the same.  This is such a miracle considering where I was last year at this time.

*Signed Copies* of my BOOK!

More Available in the shop!

The Artist in the Office: How to Creatively Survive and Thrive Seven Days a Week (Paperback)

Everything on this blog is copyright of Summer Pierre, unless otherwise noted! Please do not steal my stuff! I know I should think of it as an honor, but I don't!
%d bloggers like this: